Update on the little man

I haven't written on the blog in a while, but I figured this would be the best place to update those who want to know what's going on with Ethan as of now. I probably won't continue to post on here, but it's too much for a facebook post.

Around 27 weeks they saw something on the u/s that looked different with the spine. The next week they wouldn't see it, the next week they would. They ordered a fetal MRI which came back normal, but when we saw the perinatologist he was pretty sure that Ethan had a Hemivertebrae of the t11/12 area and that he was missing some ribs. This information sucked, not what we wanted to hear and the fact that the doctor wasn't all that helpful with the information made it worse. He wanted to wait and see once he was born and get an x ray and go from there.

Because of the single umbilical artery, when Ethan was born they wanted to do a renal u/s and check for reflux (urine going back up from ureter into kidney). Around 21 weeks on the u/s, it showed that his left kindey was dilated, but we were told that it resolved around 28 weeks and every time they checked after that, they said it was good. The u/s showed that his left kidney was still a little larger, but the reflux test was negative. The Urologist wants to see Ethan back in April and he will get another u/s at the end of this month to see if it's getting better or worse. They say it's common in boys and generally resolves on it's own. When they did the u/s they also noted a small diverticulum on the bladder.

The x ray showed that there is an abnormality with the thoracic spine (T3), so not where the Perinatologist thought. Because of this abnormality, it caused issues with his ribs as well and because of location, it's affecting the ribs over his heart and lung. Even though we had an idea that hemivertebrae may be the diagnosis, it was like it was all new again because of the location and it being worse than we thought. The doctors thought that because of that and the kidney issue, that Ethan had Poland Syndrome or Vacteryl/Vater syndrome. It was pretty devastating as a parent to be given the greatest gift in life and then be told of these things and not know what lies ahead for him. It was heartbreaking.

We got discharged and the pediatrician set us up with the geneticist at UNM. We saw the doctor there and were told that he does not believe that this is linked to a syndrome, but from the two vessel cord and lack of blood flow to the area during development. He felt that blood testing and everything else were not needed and that it wasn't linked to anything chromosomal. He feels that everything else about him is normal, which was wonderful news.

A week or so after that, we saw Orthopedics at Carrie Tingly with UNM. They did more x rays on his spine but couldn't see exactly what was going on with it yet. What we do know is that his spine is already curving from whatever is going on around the T3 area, so he is diagnosed with Congenital Scoliosis. We also know that his first 3 ribs and 5th rib on his left side didn't form correctly, there for leaving them looking abnormal and that the 4th rib isn't there. Because of the first 3 ribs being abnormal, they formed differently and arch more, making it look like he's missing more than just one rib. The main concern at this point with this issue is how to protect his chest (heart and lung) since he's missing the ribs that would normally do so and as he grows, will those ribs continue to grow allowing his lung and heart to grow as well or will they restrict growth in any way. The Orthopod told us that we would assume Ethan would be tall because of Dan's height and my height, but because of the scoliosis and issue with the spine, he probably won't be as tall as we would think. I asked him if he thought that there would be issues with those ribs not growing, restricting growth of the lung, he said he didn't think they would grow fully, but didn't seem to think there would be any issues with the lung not growing. He said they may want to do an MRI in the future, but they wouldn't do that until he was 2 years of age and that most kids who do require surgery on the spine because of scoliosis, that's usually not done until around 3 years of age. So, at this point, we are waiting. He wants us to bring him back for a standing x ray when he's walking and wants to see us back next February.

We also have to see a Pulmonologist on May 5th. I think he will be able to answer more of our questions regarding protection and how he thinks those ribs will/will not grow and what to expect. I think like what we learned from the other appointments, we may just not know until he grows, so it may just have to be something that's monitored. It's hard not getting answers right away and having to wait, but in the meantime he is doing great. His left shoulder pops a lot, the orthopod said it's probably from his anatomy issues on the left side, but doesn't seem to think it's anything serious and it doesn't seem to bother Ethan at all.

This is the x ray they took at the orthopedic office. Breaks my heart to see it, but you can see what's going on with the spine and ribs. 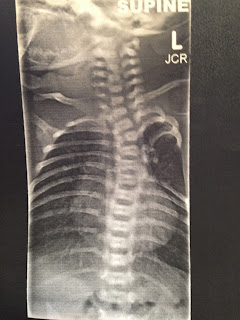 A lot of people have been asking, so I figured this was the best way to inform those who wanted to know. Continued prayers are always appreciated.

Brittney
I am 34 years old, I am a Registered Nurse. I married my best friend and high school sweetheart on March 21,2010. He is an EOD Officer in the United States Air Force. We've been stationed in South Dakota (Ellsworth AFB), Northern FL (Hurlburt Field), Italy (Aviano AB), New Mexico (Kirtland AFB) and now in Northern Virginia (Pentagon). We have an amazing 4 year old little boy, Ethan.